Going back to the title of the previous post: Rain in Spain in Galicia, etc…I just read that Galicia, or Santiago, gets 75 inches of rain per year!!!!!  Austin maybe gets 30 or so inches and rainy Portland “only” 37. So imagine more than twice those numbers! Ireland indeed.

This has been a week (almost) of walking 6-7 hours a day, sometimes a bit less, others a lot more. My legs are dying, but my endurance is fine, so, though it’s about 7:45pm here right now, we’ll be going out soon to do a bit of “tapas” hopping which has been the norm for our evening meals. And we usually hit 2-3 different places, all with slightly different styles, some offer free nibbles with drinks, others not. Sometimes we’ll order a small plate or two of something, sometimes not. We found a great place last night which was just barely a hole in the wall which must have been someone’s kitchen a few hundred years ago. 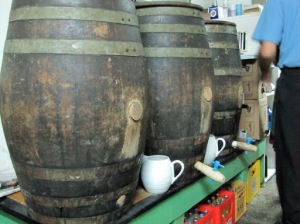 There was a fireplace at waist level with no screen and a small fire going right in the room. The owner used it as a trash can when she cleaned tables: tossed paper and other stuff right in. She included two pieces of cheese, and four pieces of bread topped with dry chouriço (see the foto here for the fire and the plate!)  We’re gonna  go back tonight. Another place we like is the Gato Negro right around the corner from the hotel. 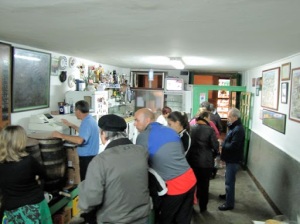 It is definitely a non-tourist place, mostly locals who know each other. They have three large wooden wine barrels from which they serve local, probably family produced, wines. I had a glass the other night and it was surely “new” wine, white, unfiltered and cloudy. And not bad. I’ll have more tonight there also!

Now, all this leads me to the food in Santiago. Well, it mostly sucks. We have had 6 or 7 restaurant meals and finally, yesterday, we found one we want to return to. But more on that down the line. Galicia is known of it’s seafood, most of the seafood Madrid eats comes from here: clams, mussels, octopus (pulpo), many kinds of fish, razor clams, and of course, scallops. Remember the scallop shell is the symbol of the Caminho de Santiago (usually the Camino de, but I use the Portuguese spelling to be different, I suppose; the local Galego spelling is Camiño, but that is a “spanishized” spelling that derives from the time when Franco outlawed all the local dialects and tried to make them more Spanish, but that’s another blog entry). 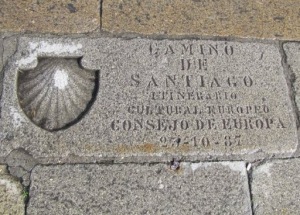 And because of the rain, vegetables here look fantastic. Pork and beef and dairy products are also renowned here. But the problem is, this was a very poor area, and they still cook like it. They don’t use salt. They don’t use much seasoning of any kind. And so, when they cook these lovely things, the flavors fall flat, they are unexciting, boring, tedious, insipid.

I ordered some steamed mussels the other night. And that’s exactly what I got. A plate of steamed mussels. No nuttin’ in them except water. I make steamed mussels, but I first saute some garlic in olive oil, maybe add some red pepper flakes, then throw in some white wine, some Italian parsley, maybe a basil leaf or two, then the mussels and steam them for 3 minutes or so. Oh, yes, salt and pepper. The result is delicious, flavorful and rich. The broth from the mussels combines with the wine to make a yummy liquor to sop up with bread. In Galicia, forget it. Bland. Salads are mundane. Meats are mundane. Cooked vegetables are mundane. Now I did have a nice bowl of lentil soup yesterday, and two out of three bowls of the ubiquitous caldo galego, a soup with turnip greens, potatoes and white beans, cooked in meat broth of some sort have been ok; one had NO salt whatsoever and I had to keep adding it.

But I first had to ask for salt, and I’m sure the waitress thought I was insane adding salt like I did. But screw it! I wanted to bring out some flavor, something they know nothing about. Oh well. I’m off to Florence in two days and will eat well for 10 days there and in Rome. (So stay tuned for those fattening episodes!) Yes, I’ve lost weight here. Thank gawd. Now I won’t feel so bad about eating lunch twice a day in Italy!

And to that end, I’ve already made reservations at a handful of restaurants in Rome, Florence, Bologna and Panzano in Chianti. I did most of these from Portland since Vonage now offers free long distance to 60 countries as part of their $25 a month service. Very cool.

Now, I mentioned in the first posting from Santiago that I’m here for this week with my pal Carlos Femat. Carlos and I have known each other since 1981, nearly 30 years. We’ve had our moments, we’ve worked together on freelance graphic design projects, we’ve had a couple hundred meals together, mostly in Austin, some at my house, some at his, some in restaurants good and bad. And now, mostly bad, in Santiago.

Carlos is from Mission, Texas, got his degree in studio art from UT-Austin, and has worked mostly in the field of graphic design and marketing. He now works for the Texas Higher Education Coordinating Board. Whatever that is!!!!  Anyway, we share a very similar sense of humor, love many of the same films, much of the same music and, well, I’ll leave some things to the imagination. No, not that.  We shared an office space for a few years when I quit my ad agency job in 1993 and then tripled my income. But this is the first time we’ve traveled together, well, except for a great trip to New Orleans in 1993 which had screwy consequences for us both. Stories untold. At least here. Our inspiration for that trip was to hear a great Haitian band, Tabou Combo, that was playing over my birthday weekend that year for free at the Creole Tomato Festival. The tomatoes were nothing special. Tabou Combo was. We had good food, some laughs and we’re still paying for that trip today. Stories untold.

It’s great for me to be here with Carlos since I now live 2500 miles from Austin and I used to be able to have lunch with him two or three times a week. Or more. Yep, we’ve shared about 10,000 laughs here. And really haven’t pissed one another off—pissed off one another. (I’m supposed to be the writer.)  Tomorrow is our last day together (not counting the wee hours on Thursday when he leaves for the airport) and last days are always weird. Not sure why. I’ll see him again in February when I go to Austin to work on Carnaval; I’ll stay at his place, so we’ll have lots of time to catch up. More laughs. More meals. I like Carlos. I have a nice handful of friends, but Carlos is one of the best because we share so many things, we can poke at each other, and we can mostly shed each other’s crap. I’m really glad he made the time to make this trip with me. Made it very special. Thanks, bro-mano.

We arrived here a week ago tomorrow morning after a crappy experience in the Madrid airport. I will only say that this is the only airport I’ve been to, probably ever, where the gate assignments are made less than an hour before flights are scheduled to leave. We had no idea what gate to go to, and that after a nine hour flight from Dallas, dead on our feet. So we stood in front of a screen, and when the plane we were to take arrived at whatever gate, they posted the info and everyone scattered. Yes, dozens were left at our screen, and hundreds more around the airport at similar screens around the airport waiting for gate information. Primitive, Madrid. Primitive. Oh, and the ONE ATM in our part of the airport was out of order, half dozen guys trying to fix it, so we could not get any money. This is a major airport, people. Get with the mid-20th century. Soon.

Speaking of 20th, now 21st century in Galicia, the first morning I awoke in Santiago, I saw a newspaper in the hotel which had a picture of Martin Sheen in front of the Cathedral. What the?  The article covered a film he was shooting (well, his son, Emilio Estevez wrote it and was directing) in Galicia. Interestingly, it is a film called The Way and is the story of an American pilgrim following the Caminho/Camiño de Santiago. Not sure of further details, but Martin stated that after shooting, he was going to walk part of the Caminho. I’ve read that he’s a pretty devout Catholic, so this should be no surprise…plus, his dad was born in Galicia, so it all comes together.

The article said they had two more weeks to shoot around here, and that they would be shooting inside the Cathedral that day; significant because it is the first, yeah, only time anyone has been allowed to shoot a film inside the church. Wow. I guess having been President of the USA, Marty has some pull.

So, as Carlos continued to snore, I sojourned off toward the church (after getting my first cup of crappy coffee in Spain…all subsequent ones have been equally crappy, but more later). I went inside the church just in time because they soon thereafter roped off the stairway to further visitors since they were about to shoot the scene where Marty, as the Pilgrim, first walked through the door of the Cathedral at the end of his trek. I hovered about trying to get a good photo or two and managed to snap a couple that are ok. The wranglers or whatever  you call them who police the film location were might vigilant about preventing too much activity too close to the action. 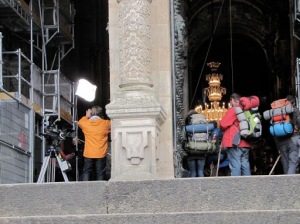 So I went outside where I knew it’d be safer, and I knew Marty (my new buddy) would have to start the action for this scene, walking INTO the church, after all. I stood on the landing outside the door waiting for the shot and Marty came near, waiting for his cue. I was SO tempted to scream, “Mr. President, your shoe is untied,” which it was, but I didn’t…why? Not sure. He was a few feet away, I really could have whispered, and his shoe WAS coming untied. 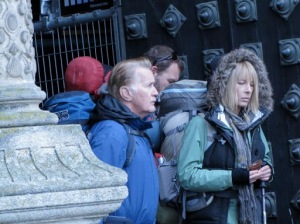 Hope he remembers to check his laces when he really gets out on the trail, hate to read about an accident in People magazine. “Pilgrim President Pfalls After Pukey Pfood in sPain.”