One thing that truly mystifies me is why many cultures, Italian, Spanish, Brazilian, are so darn afraid of fresh air, at least in “winter”. I put that word in quotes because, as I leave Italy–I’m writing this on my flight from Rome to NYC–it’s mid-autumn, and the weather has been mostly fantastic. IT HAS NOT BEEN COLD. Highs have been in the upper 60s or low 70s in Rome the last few days, yet, most natives have been bundled up in heavy coats, gloves, hats and sweaters as if a major blizzard were approaching. Plus, I did not enter a single building, be it restaurant, shop, my hotel, cafe, in which the was not blasting hot air, creating tropical conditions more than suitable for raising prize orchids. 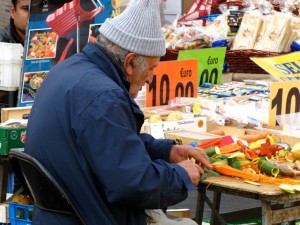 Seems like, even though it isn’t cold, isn’t winter, folks have an automatic “now it’s winter” date, maybe November First, after which, even if it’s in the sultry seventies, ya just gotta wear your winter duds, crank up the heat, and roast some chestnuts on an open fire. This chestnut thing is not poetic fantasy. Walk around Rome or Florence this time of year and you’ll find guys roasting them in charcoal fired contraptions, and they sell these freshly roasted nasty nuggets on the street. I say nasty because, other than maybe eating liver, which I detest, a chestnut is the most vile thing I’ve ever put in my mouth.

I tried one one (honestly) chilly night in Florence many years ago. Once. One time. I bit into the nut, and PHEWWWWWW…spit it out immediately onto the pavement. It was really disgusting. I can’t recall exactly what it was like, other than it was B-A-D. Never again.

I laughed plenty in the last few days in Italy watching Italians saunter around their wonderful cities, totally wrapped up and ready for Jack Frost to bite them on the ass, suck the blood from their necks, knock them down in the snow. Yeah, those 65 degree cold spells are dangerous!

Forget the concept of fresh air. Ain’t gonna happen. Seems like a national law that every enclosed space used for just about any human behavior must be stuffy and warm. Don’t want that nasty fresh air to hit you and the face and make you gravely ill.

In 1998, I was on a train from Genoa to Milan where I was gonna meet my brother Cris at the airport so we could spend a week bumming around Italy together–I think it was his only real vacation since he’d gotten married. It was chilly out–mid-November–and I had on a sweater and a jacket. But the train compartment was otherwise full of Italians, likewise bundled up. The window, I believe, was open slightly and I welcomed that bit of cooler, fresh air. No sooner had I registered the fact that the window was open, but some heat-starved, draft-hating Italian got up and closed the window, and, I think, also cranked up the heat! It must have already been 80 in there, but that wasn’t good enough. Maybe he was trying to sprout some seeds, pop some corn, bake some lasagne, but he wanted any trace of comfort pushed out definitively. And that was that. I think I stripped off my jacket, pulled off my sweater, took off my shirt, and pulled down my pants to get comfortable. Well, some parts of that surely happened. But comfortable I was not to be. Not until the train pulled into Milano Centrale and I could breath fresh air again. And that blast of cold can be as delicious as a glass of cold coca-cola on a hot Texas afternoon.

Flash forward a bit:
Now, funny thing. I’m back in NYC. Got in yesterday afternoon, it was about 60 degrees out. Sunshine to spare. And everyone on the street was bundled up for winter. And the second I entered the hotel (hotel? I’m staying at a hostel for merchant marines run by the Lutheran church, the Seafarers & International House, by far the creepiest place I’ve stayed on this trip), ok, the moment I entered the hotel, I felt that now-familiar tropical heatwave slap me in the face! This hotel is hotter than any place I was at in Italy or Spain! The lobby could double as the inside of a bakery oven, and my room, which has no thermostat, is equally steamy. The only salvation is that the windows open in the room and I can moderate the temp in that way.

Maybe my observations of such things in foreign countries is heightened by the fact that I’m in foreign countries. We are not, apparently, so different here. I see the same thing in Portland when it gets down to 60 or 65…the NW weenies can’t stand those frigid temps and immediately don their stocking caps, gloves, heavy coats and scarves. And they probably find me odd walking around in a t-shirt.

And they are probably correct….

0 comments on “Italians (Spaniards, etc) Are Afraid of the Draft”