As I write this, I’m cruising over Utah at 35,000 feet—amazing that we have Internet on airplanes finally—and am on my way to Italy, via Dallas and NYC.

So I thought I’d use the time on the plane to catch up on this blog thing…so many Brazil stories remain untold.

The topic which has been rumbling around in my mind since wandering around my old neighborhood in São Paulo revolves around my lost Brazilian friends. I suppose there are only two of major importance, two fellows who have had a major impact on my relationship with Brazil, and my ability to maneuver within one of the world’s craziest cultures. As it happens, I only met the second friend because I knew the first…some short number of degrees of separation, right?

Way back in what now seems the Dark Ages, about 1978, I was working my way through grad school—which I never finished—at Discount Records on “The Drag” in Austin, Texas. Record store work had been my career since high school and it was easy, pleasant, rewarding work; and it kept me impoverished. I had managed to wrangle a very substantial stock of Brazilian records for sale at the store, and customers drove from as far as Dallas and Houston to shop those five or six bins grouped in the right rear corner of the shop. I put that place on the map, at least the map of places to buy Brazilian LPs in Texas! 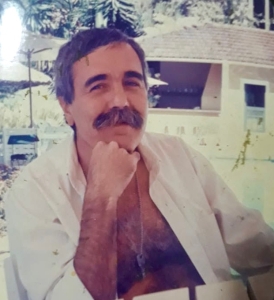 One day, a striking looking fellow with jet black hair and a unique, face-dominating walrus-like mustache came into the store. He also wore a unique name: Waldimas. Waldimas Galvão. We struck up a long conversation there in those LP stacks. It was very pleasant hour or so, an hour or so which would lead to a lifetime friendship. He returned to the store a few more times, often with his slightly peevish girlfriend, Lilian. A month or more went by when he came in with a question—Lilian was moving back to São Paulo and he needed a place to live while he pursued his Master’s degree in the History Department at UT. I must have mentioned that I would be soon looking for a roommate, and so, as luck would have it, we each had a solution to our then pressing housing issues.

Waldimas moved in, I think it was around Christmas time of 1978, maybe right after New Year’s. It was an instant bond for us. Our respective outlooks on politics, music, film, and so on were nearly identical, it was uncanny. And we likewise shared a similar and deep sense of humor. Luckily, or, maybe not so luckily, Waldimas’s English was very good, and my new Portuguese was shaky at best, so we started out—then and for the balance of our relationship—spoke mostly in English…even when I moved in with him and his brother in São Paulo about 18 months later…Ok, I realized as I was waiting for the john at the back of this plane that, if I continued the story at this rate of detail, I’d be writing a book. So, let’s cut to the chase:

Waldimas died in February of 2002, after a long battle with cancer. He smoked constantly. It got his lungs, and then evolved into a brain tumor. I think it went on for about four years, and then he lost, as did those of us who knew him. In spite of the fact that we only saw each other a few times after my stay in SP, and traded only a handful of  letters and phone calls, Waldimas, right to the end, was perhaps the closest friend I’ve ever had. In some ways, he felt more like a brother, like family. Only one other person, perhaps, has ever understood me as well as Waldimas. I could say anything to him, about anything, and he knew exactly the right thing to say, somehow getting inside my head and my heart comprehending what I needed to hear, good, bad or ugly. He just friggin’ knew. It was spooky. He never made light of my various travails, he never questioned my motives for making any right or wrong decisions. He just friggin’ knew.

Now, I miss him terribly, like I miss my own brother Cris who was tragically (is there any other way?) murdered just four months after Waldimas died. Two brothers lost within the space of a few months. It was rough. And it still is.

Being back in SP, in our old neighborhood, staying with his brother, Walminho, all this came rushing back. Some of it was great, some was very hard. But come back it all did. I felt like I was back in our old environment…I WAS back there, and Walminho and I had some long, teary “bate-papos” about our late brother, Diminha.

Early in my 1980 stay, Waldimas and I went from SP to Rio to liberate my confiscated luggage from the Brazilian customs office at the airport. At the time, he was employed by Editora Abril, the largest magazine publisher in Brazil, a bit like Time-Life in the USA. To aid in my apprehended baggage issue, he called on the services of a “fixer” at Abril’s Rio office, who, after a few days, managed to free the bags. But while at the Abril office that morning, Waldimas popped in on an old friend of his, Aristélio Andrade who, at the time was the Rio bureau chief for Placar, Abril’s major sports magazine. On that first day, we—Waldimas, Aristélio and I—went to lunch at a nice restaurant—I even remember the name—Botequim—in Botafogo, not far from Abril’s office.

The always-savvy Waldimas introduced me to Aristélio because I was going to have to stay in Rio for quite a few days to solve my problem, and he knew Aristélio would be the right person to help me get oriented in Rio. Well, he was absolutely correct. That very night, Aristélio took me to the first anniversary celebration of the now-defunct, but still  legendary Clube do Samba which was founded by the great, and also late, samba singer João Nogueira, along with Chico Buarque and other luminaries. It was a magical night of hard hitting samba, dancing and a few special appearances by the likes of Chico, João and others.

On subsequent visits to Rio, Aristélio introduced me to many other bohemian delights in Rio like the wonderful Cafe Lamas which was founded in 1874 or thereabouts, to the giant Maracanã soccer stadium for a couple of wild soccer games, to the other wonderful old traditional restaurant, the Cosmipolita where the famous steak dish, filet a Oswaldo Aranha was invented, and to so many other fantastic unforgettable places which I still remember in great detail to this day.

Aristélio was a true bohemian-intellectual-journalist-leftist-communist music fanatic. He knew all the great samba singers and composers, had all their records, was involved in the extreme leftist resistance after the 1964 military coup—his stories of his friends’ imprisonment and torture were absolutely blood curdling—and, he loved food, jazz and life. We shared hours of fascinating conversation over countless choppes, deep belly laughs, and a few tears. As with Waldimas, our bond was immediate, strong and profound. He would do anything for me. Anything. He was a bit like a father figure—I guess he was at least 10 years older than me (it was actually 20)—but I looked up to his wisdom, knowledge, and worldliness as I’m sure many do with their real fathers. Without his protective guidance and endless stream of recommendations for music, restaurants, book stores and other fascinating places, my comprehension and knowledge of Rio would have been greatly diminished. No, not diminished because that implies that it existed at one point. No, it would have been just simpler, much less to start with, and would be far poorer today, and far less meaningful to me.

Shall we cut to the chase…again?

I have no idea today if Aristélio is alive or dead. Sometime in the early 2000s, his phone number changed, and he retired, canceled his email address, and he moved to the small town in the mountains outside Rio call Novo Friburgo. Somehow, after emailing some folks, in 2009 I secured his new home number. On my trip to Rio in that year, I called him and discovered that he was very sick due to, guess what? Cancer. Again. He was in very bad shape, was on oxygen, and maybe bedridden. He invited me to come visit him in Novo Friburgo . I so much wanted to see him again, and he wanted to see me. But after thinking about seeing him in that condition, I, perhaps selfishly, decided not to make the trip. My memories of him were all so positive, so strong, and they were memories of a healthy Aristélio. I realized that if I went up to visit him, my final memories of him would be of an ailing, frail old man. And I choose to not let those images take over all the hundreds, thousands of little pictures in my mind of all wonderful things and conversations we had over nearly 30 years. Maybe I did the wrong thing. Perhaps I should have gone. But I didn’t. And I can’t really call him because I didn’t inform him of my decision and felt strange about that, embarrassed. And if I call, and if he has since passed away, which could very well be the case, I would feel awkward and clumsy speaking with his widow, or his children or his grandchildren. As I type this, I realize that all this has been about me. I denied my friend Aristélio something he dearly wanted from me…a last visit, and I have to assume it would have truly been the last.

I’ve just now decided I need to call him when I get back home, regardless. Our friendship means too much to both of us to let my fears and inhibitions control the circumstances of our relationship.

I just hope it’s not too late…
+++++++++++
Update: 6 Dec, 2010…I just noticed a comment to this post from a French journalist who knew Aristélio which informed me of Aristélio’s passing in early March of this year. I am such an asshole for not having gone to visit him last year when I had the chance. Idiota. Idiota. Idiota.