(This was written on 12 October, but only posted today, so “last night was really two nights ago)

In real time, fast forward some….I’m on my first of three flights home, Rio to Miami in about 9 hours. We’ll see how far I get before the dinner cart shows up. I’m listening to some great choro music right now on the lump-top. Jorge Silva Filho made me a disc just a while ago of everything ever recorded by Jacob do Bandolim, the greatest mandolin player ever in Brazil: 300 songs worth! Porra!  (wow! shit!, literally:  sperm!)

Last night was the Paulinho da Viola concert (show) which serves as the terminal bookend for my trip, it could have been totally amazing, and on many levels, it was, but, unfortunately, the tickets were free which always makes for confusion and for a slightly rowdy audience. The crowd was mostly under-30s, very noisy. And there were no chairs. Oh, and Paulinho didn’t start playing until about 11.30pm.

Musically it was wonderful (please see previous post for some background on this guy; I think I still need to give some more of his background, but that will have to wait. I realized that I hadn’t seen a actual concert of his since probably 1980, so it was a great serendipitous surprise that I was able to catch the show. Great timing for the trip after all. He played a terrific selection of his hits, though there is now way all his greatest could fit in a 90-minute concert. Yes, he’s that good.

He played some of his oldest sambas, and some of his very newest. Rousing carnaval sambas to his lilting softer sambas. Too bad that there was never a single moment when the crowd shut up. Not during those enchanting tunes like Sinal Fechado and Nervos de Aço, nor in his sometimes lengthy introductions and  explanations of his sambas. KIDS!  What are you doing here if you are not going to listen? Why did you wait in line for two hours to get your tickets, then another two hours to get in the venue if all you want to do is babble? A total lack of respect for one of the world’s greatest living artists. So sad, yet so common.

Of course, all in all, it was a great experience. Even with such a chato (tedious/boring) crowd, the concert was a spectacular performance by a fantastically talented musician. Poised, charismatic and compelling. I can never get enough of Paulinho, and I can promise you I’ve already had plenty.

Earlier on Sunday I took the bus over to the famous beach called Ipanema, you heard the song, right? Anyway, every Sunday they have an arts and crafts fair, the Feira Hippie which features mostly crappy jewelry, ugly t-shirts with recipes for caipirinhas printed on the front. But there are lots of artists displaying their paintings, most reasonably priced, and most absolutely dreadful. Ok, not dreadful, but not to my taste. Lots of happy, dancing sambistas, baianas, Corocovados and favela paintings. Yeah, I want a painting of a cheerful slum in full-ahead party mode. But there are two artists from whom I’ve bought in the past.

One, whose name I can’t remember, is obsessed with flying saucers gobbling up Rio soccer ball by soccer ball and paints UFOs into most of his works. I have bought a number of these over the years and enjoy them very much. He’s getting old, is slightly crippled now, and using a cane, and might be a bit hard of hearing. I had a couple of chats with him, and he’s as whacky and arbitrary with his pricing as ever…he had five or six paintings of the same size, all priced around 70 reais. Then one with BIG flying saucers, same size, and he wanted 600 for it!  Obviously, he doesn’t want to sell it. I did find one that was a bit different; it depicts a fan of the Botofogo soccer team crying in his cachaça at the end of a match in which the neighboring Flamengo team was the victor. Outside the window of the local bar where he’s suffering, there is a band of Flamenguistas celebrating in the street. Very interesting. (I’ll post it tomorrow.)

The other is a fellow named Vitorino who I met in 1999 when I bought a very large piece of his, maybe four feet by 3 feet. It is his version of the samba school Mangueira whose colors are green and pink. 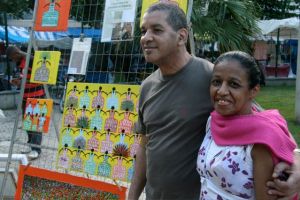 The drummers are in straight lines, and rendered almost like gingerbread men, in silhouette. They are against a green background, wearing pink shirts and trousers. There are at least 100 figures in the painting. Nice. He wasn’t at the fair last Sunday and I was delighted to find him, actually his wife, showing new works this week. I immediately saw one I thought would work as a Carnaval poster and started negotiating. Finally hit a price we both liked and she wrapped it up. Interestingly, back in 2000 or so, I’d talked to her about getting him to do a poster way back then, but I didn’t follow up and figured it would have been too difficult by long distance. So, I will finally get a Vitorino poster, and Carnaval will have its first horizontal poster ever. 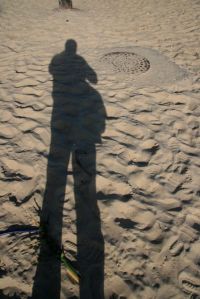 After the feira, I walked over a block to the actual beach of Ipanema to shoot a couple of photos. Here is finally a photo of me on the beach, about the only way you’ll find me on the beach.

The sun was already low on the horizon, so my beach shots were not great, but I heard some drums from down the street and followed the sound to find a group of young kids playing samba drums, a bateria. The youngest were probably five or six, the oldest, maybe 11 or 12. I think it was part of a City of Rio project to get kids off the streets and involve them in something more than drug selling. They were great, lots of fun, and clearly loving what they were doing, though the youngest were just barely bigger than some of the drums. Check out the flickr photo link (More Photos) near the top of the page in the right hand column for more of these kids.

(This is incomplete and I’m not sure how much I’ll get to today…at SF airport…36 hours without sleeping. but check back wednesday for more BS and fotos.)

0 comments on “Home again, home again (not quite)”