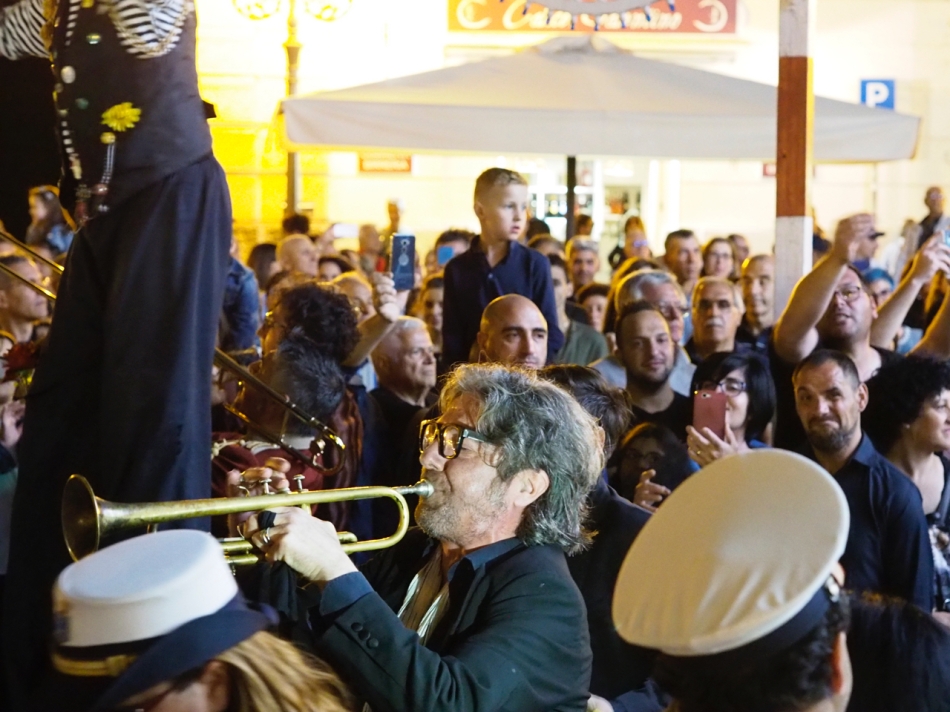 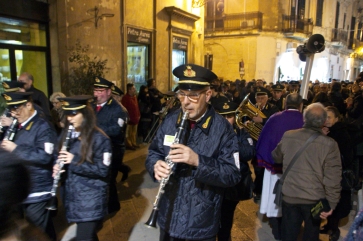 On my very first day in Lecce in March of 2016 I had the pleasure of seeing one of the local brass marching bands (banda di giro) in a Good Friday procession snaking through Lecce—it was a magical experience for me. As a kid, on the few occasions I encountered a marching band, I did my best to follow them around to maximize my exposure to the music!

Soon after I moved to Lecce in September, I had another opportunity to hear a brass band doing their thing in the streets during another religious procession, I’m not sure it was the same group, I think it wasn’t. And a few weeks ago, by chance, I stumbled on another Banda di Giro playing and parading for what I assume was another religious event…here is a short sample, and, yes, I was following them through the streets!

Clearly the brass band/banda di giro tradition is alive and well in the Salento! Well, a local jazz dude, Cesare dell’Anna, who walks the line between traditional forms and more modern takes has assembled a large ensemble, GiroDiBanda, aimed at taking the brass band form to another level. I wish I could tell you the year these folks began, and more details about their history, but in true Italian fashion, their website is painfully lacking in details. So, I can, at least, share the mission statement:

GirodiBanda is the result of a long investigation that reveals the cultural and artistic heritage of the people of Salento. The project was born of the desire to continue to pass along the music created by local people—an expression of cultural authenticity, but at the same time, displaying a bit of refinement and devotion to deep and honest cultural research.

Whatever that means! ? !
With the release of their new CD, Guerra, GiroDiBanda is performing regularly in this area. Which makes this even more impressive is that the group can consist of up to 30 musicians and singers, and they always perform with their own freestanding, old fashioned bandstand, a gazebo-like structure thoroughly illuminated with decorative lights, called a cassa armonica. The effect is spellbinding, but makes shooting good photos a bit of a challenge. I was lucky to catch them recently at a performance marginally connected with the annual celebration of the feast days of St Peter and St Paul in nearby Galatina—a small town about 12 miles south of Lecce. The piazza was packed and the music was jumping! When in full force, GiroDiBanda travels with their own stilt-walkers and fire eaters, and these street performers certainly added to the excitement, layering on that last bit of festival ambience. The show lasted nearly two hours and was nothing short of a tour de force—my friends and I returned to Lecce well after midnight in a lingering contact high, not from grass, but from the sheer energy of these gifted performers.

Here are some photos: 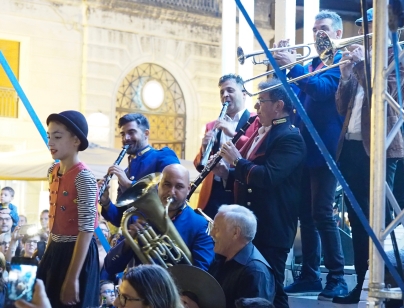 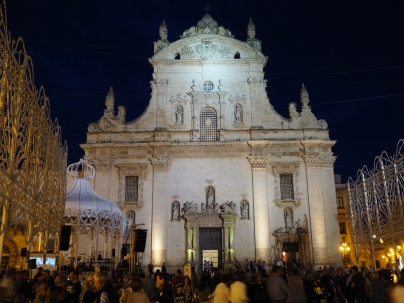 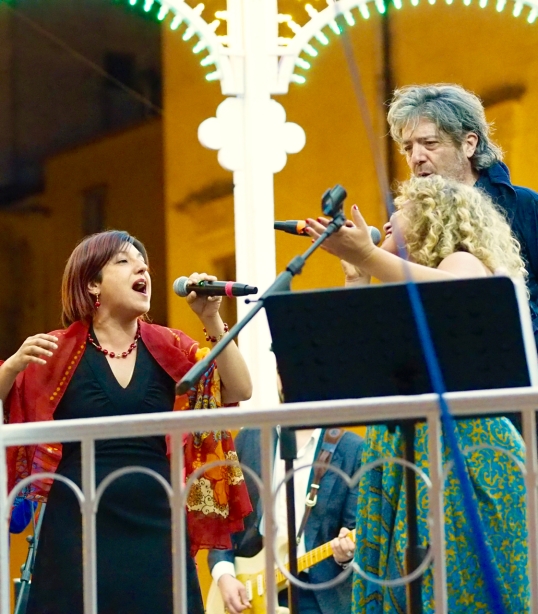 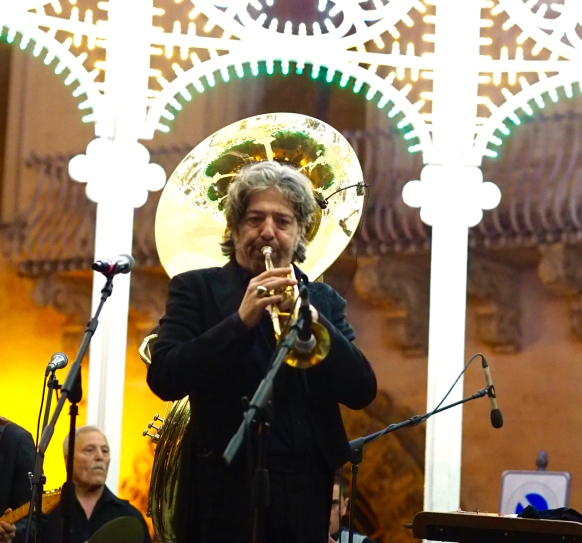 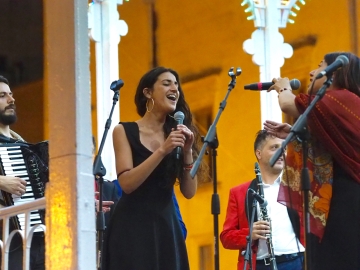 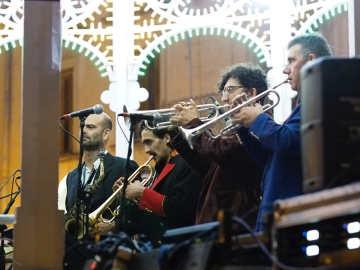 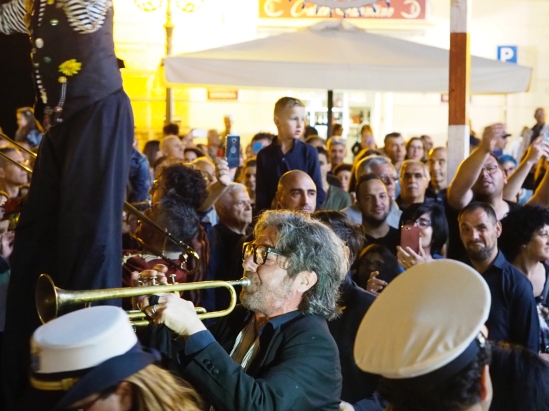 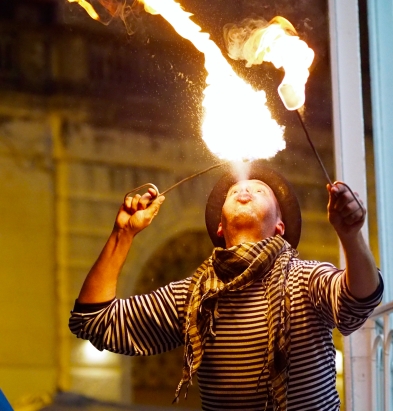 The first video included here is a traditional tune from the southern Italian folk tradition called Caterina, and it is included on their new CD. Yes, it rocks! The vocalists on this selection are local faves Maria Mazzotta and Irene Lungo.

This video, which was my Facebook Live video—excuse the crappy quality—which is a performance of a more typical Salento music form called the pizzica, and wild, exuberant dance originally performed as a sort of exorcism! The male vocalist is named Claudio Cavallo, and the female singer in the black dress is Rachele Andrioli. Love this music! If you are ever around Lecce, do keep an eye open for shows by GiroDiBanda, or Cesare dell’Anna, or his Balkan-influence band, Opa Cupa, it will be well worth the effort!

0 comments on “GiroDiBanda Live in Galatina”

My secret!
Dandan Mian (擔擔麵); Dandan Noodles. I made the noodles by hand. I miss Chinese food so much, but mine is pretty damn good! #dandannoodles #dandanmian #擔擔麵 #chinesefood #sichuanfood #sichuan #chinesecookingdemystified #handmadenoodles #cucinacinese #cina
Castel Trosino. Where I spent the afternoon. Fuck lockdown. Fuck Conte. Fuck the police. I taught a friend how to bake a cake! The virus is long gone, friends...what are you afraid of? #martiallaw #casteltrosino #ascoli #ascolipiceno #piccoloborgo #borgo #italy #antifascist
It’s Spring, fresh peas are in season, so time to make this yummy dish: farfalle (bow ties) with fresh peas and prosciutto! Ya gotta try this SOON! #peas #piselli #farfalle #pasta #pastabowties #bowtiepasta #prosciutto #italy #martiallawcooking
Our bread today. Natural starter/pasta madre. #bread #pane #pastamadre #lievitomadre #sourdough #naturalyeast #martiallaw
Lunch: Spinach risotto! . #risotto #italianfood #italia #italy
Back to India for lunch. Hara Bhara Murgh—Chicken in Cilantro ‘Curry’ and an invention: curry of cauliflower and fava beans! Both home runs! #indianfood #harabharamurgh #cilantrochicken #cilantro #harighotra #gobi #fava #curry #favabeans #martiallawcooking
Lunch: Back to Italy—Penne alla Bettola (aka, Penne alla Vodka), a now classic dish created probably 50 years ago at one of my favorite restaurants in Firenze, La Vecchia Bettola—a place you must try for a taste of the true cucina fiorentina, few tourists and fantastic food! This is essentially a blitzed "sugo marinara” with a bit of vodka and cream added along the way. I think you can Google “Penne alla Vecchia Bettola” for the recipe; if you can’t find it, let me know. #penneallabettola #penneallavecchiabettola #penneallavodka #lavecchiabettola #firenze #florence #cucinaitaliana #italy
More a Indian food, doing the best I can with limited ingredients. Rogan josh (turkey thigh instead of lamb); Aloo Gobi, cauliflower and potatoes. Yummy. Tomorrow a 36-hour fast! #roganjosh #indianfood #aloogobi #ciboindiano #curry
Follow A Texan In Ascoli on WordPress.com